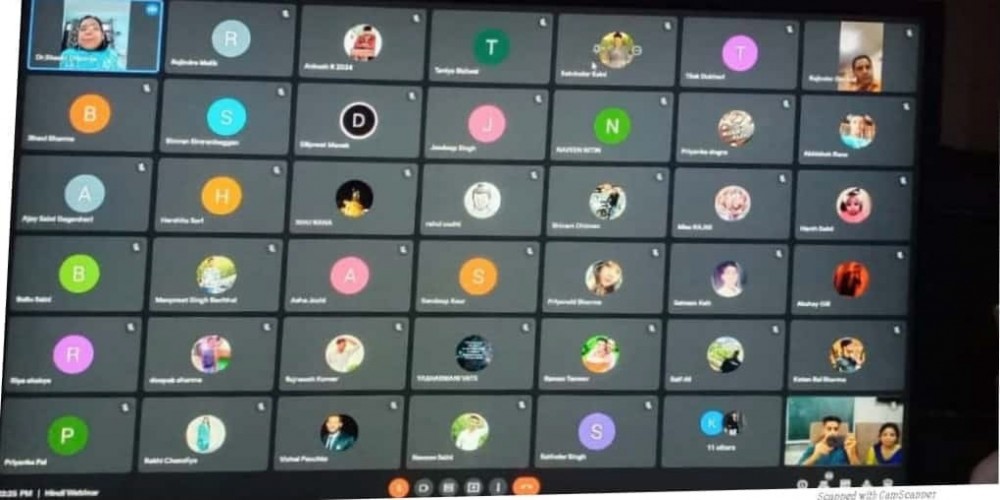 Gandhi Memorial National College Ambala Cantt, Hindi Department celebrated Hindi festival on 14/9/2021 by organizing a one-day lecture on the occasion of Hindi Diwas in which Dr. Shashi Dhamija, President, Rashtrabhasha Vichar Manch played the role as the chief guest. In the lecture, she gave her views on the international glory of Hindi, in which she told that the field of Hindi language is in the direction of broadness. Many foreign universities have accepted Hindi as the language of course. Congratulating the Principal of the college, Dr. Rajpal Singh, said that the Hindi department of the college has promoted Hindi through a new initiative. Posters were put up in public places. Varna distribution campaign was conducted, in the same series today lectures were organized. Program coordinator, Hindi Department Head Dr. Ritu Gupta said that there is dominance of Hindi. Overseas litterateurs have kept their culture and tradition alive through language in foreign countries. Program co convener Dr. Rajendra Deswal said that today Hindi is the language of technology. Many International webinars were organized during this Corona period. Dr. Anish said that the e-world of Hindi is in the direction of prosperity. International conferences and Hindi promotional organizations worked tirelessly to make Hindi universal.

BE THE FIRST BE WITH THE FIRST

Department of Commerce Organised Educational Tour to Jaipur from 28 March,19 to 31 March,19

Department of Zoology and Botany is organising one day educational field trip to government fish breeding farm, Jansui on 1 April, 2019

One day inter-college students seminar on 27 March,2019 organised by department of political science

Dr. (Brig.) Rahul Trehan, the renowned Cardiologist will talk about Cardiopulmonary Resuscitation – An awareness and execution of basic life support protocols on April 1,2019.

Organising One-Day Training program for Teaching and Non-Teaching Faculty on “Assessment of Income Tax and Financial Planning “ by CA Vijay Gupta on 6April,2019

All the members of IQAC team are requested to attend the meeting at 11.30am on 16April Agenda

Department of Psychology in collaboration with Department of Commerce of G.M.N. College, Ambala Cantt is organizing one day “Self Defence Training Program” for girls in association with Karate Association of India on 18.04.2019.

Jaswant Rai Memorial Library is going to organize One Day Workshop on Accessing E-Resources in the reading section of its premises on April 29, 2019 (Monday) at 10:30am onwards. All the staff members (Teaching and Non-Teaching) are requested to attend the same.

Notice regarding Scholarships for SC/BC Students

Applications are invited for the appointment of faculty on contract basis

Applications are invited for the appointment of faculty on contract basis.

PG ADMISSIONS : Students with reappear in only one subject/paper either in 5th or 6th Semester at UG level now can seek admission in PG courses(conditions apply)

One Day Seminar On Quality Initiatives

Notice regarding Scholarships for SC/BC Students

Instruction Regarding Re-evaluation of Answer-Book

Notification Regarding Re-evaluation of Answer-Book

Two Days National Conference on "Plagiarism and Academic Integrity in Higher Education" from February 26-27, 2020 in Collaboration with Haryana Library Association

One Day Seminar On "Mahatma Gandhi: Making of Modern India" on March 21, 2020

Postponement of one day National Seminar on Mahatma Gandhi: Making of the Modern India

KUK notification regarding postponed of Examination

KUK NOTIFICATION REGARDING WORK FROM HOME

One Day International Webinar on Pyschosocial and Political Impact of COVID-19 on May 29, 2020

Notice for starting Even Semester Classes

List of Pending Documents to be submitted by Students

Seven Days Training Programme On How to Earn from Google